As I sit here, eating pizza from last night, I think to myself, “Why didn’t I write this sooner?”

If you haven’t already noticed (and made your bank manager very happy at the same time), DEARDROPS is now on sale! This means that I should have written this Tester’s Corner about two weeks ago. Oops…

Your mission, should you choose to accept it (*groan*), is to reach the top of the music business while keeping your sanity, your chastity, and your wits about you. I think you might just manage the first one, the second is right out considering this is an eroge, and the third…well, Shoichi gets drunk quite a lot…

Overdrive manages to one-up Kira☆Kira (in the band-related games at least) by having four heroines to choose from this time! Riho is the spunky girl who knows exactly what she wants, and isn’t afraid to take it, Yayoi’s the completely average girl with beyond-average guitar playing skills, and Rimu’s the bands drummer who’s never afraid to tell it like it is. There’s also Kanade, the  moeblob childhood friend who seems to exist just to tap that market segment. (Apparently they eat this stuff up in Japan but it didn’t appeal to me.)

Riho’s route takes centre stage (*more groaning*) and deals with the trials and tribulations DEARDROPS encounter as a band, and it’s the ‘main’ route, if you will. She’s a great change from your usual heroine as well, because she actually has confidence and drive. This is a girl who knows what she wants to do and isn’t afraid to go for broke, and I have to say I really felt for her during her route. 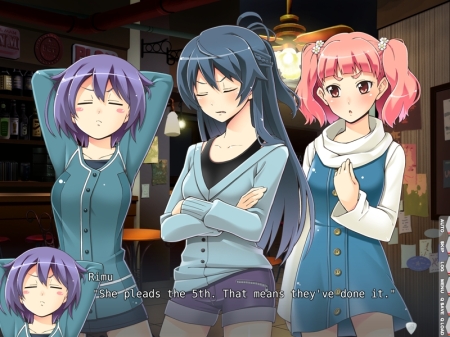 Next up was Yayoi’s route, and this is the first of the game’s sad parts: Yayoi and Rimu’s routes are each less than a quarter(!) of Riho’s route in length. I’ll provide tissues on request, because I was pretty sad when I found that out too. Anyhow, Yayoi’s story is much lighter and focused on her troubles with being the only normal member of the misfit band and is both sweet and touching at times yet also firmly cements her title of ‘Guitar Princess’.

Rimu was next (hoho), and in a rather strange turn of events, didn’t end up with an entirely comical route. I don’t know what I was expecting, but I learnt that Rimu was a much deeper person than the Common Route led me to believe…the ending will also bring you to tears (and possibly leave you reaching for the insulin).

And thus we draw to a close on this Tester’s Corner for DEARDROPS. I’d like to thank you all for reading and wish you luck with your conquests in DEARDROPS!

Kanade: But what about my route?

This entry was posted on Monday, March 19th, 2012 at 12:05 pm and is filed under Tester's Corner. You can follow any responses to this entry through the RSS 2.0 feed. Both comments and pings are currently closed.