With Guilty ~The SiN~ set to release soon, it’s time for our Tester’s Corner again! This first one comes from RF!

When I was asked if I wanted to write a Tester’s Corner for this game, I had mixed feelings.

This is an eroge, a genuine one. It’s by no means on the level of story or setting complexity of, say, Tsukihime or Higurashi. Still, the characters are enjoyable, the art style is unique (some may love it, some may hate it) and the sex scenes are naughty as hell. Oh, and there are lots of tentacles. I usually don’t like them, personally, but the ‘normal’ eroscenes were pretty good to me.

So what can one write about an eroge with the usual elements between some other things that make it unique amongst others? I wasn’t sure at first since writing about my impressions of how the story is developed would be spoilerrific, but then I said, ‘aaaah, feck it’ and decided to go with talking about the characters I liked the most… without falling into spoiler terrain much, that is.

My #1 female character is no doubt Okitsu. She’s serious, trustworthy, cold at first yet sweet as candy later on and a total tease in certain scenes. Her past is decently interesting and her character progression only makes her more lovely. She has the best romantic eroscenes in my opinion too.

The runner up would be Cassaca. Even though her sprites look a bit… awkward (she’s always in that ‘I’m holding my head because it’s too heavy’ pose) she’s lively and makes a good support character, without being a nuisance, something that happens with more frequence than we would like. Her voice actress helps a lot.

There are a bunch of other characters, but I’d prefer to move on. 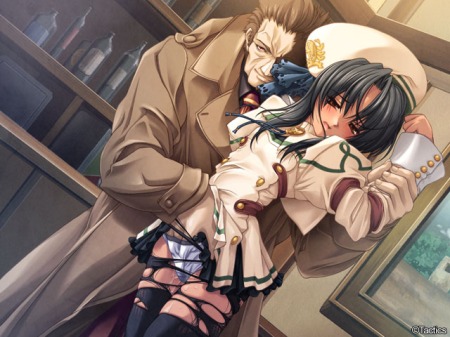 Like I said before, there are a lot of tentacles in this game and rough eroscenes (rape, corruption, blackmail, etc.), so not counting the scenes implying the main character and the girls, you’re getting mostly that. The aim of this game is kinda clear, but without forgetting about the relationships between characters and the unfolding of their stories.

Among the things I didn’t like, let’s see, the main character smokes too much. I got tired of reading text regarding how much smoking soothed his mind or how the smoke of the cigarette clouded the air or blah blah tobacco. Maybe a perk of mine, but I think they could cut it a bit, in my opinion. That’s what habits are, I guess.

With all that cleared up, I think there’s not much more I can say. I hope I at least gave a general idea of what to expect from this game.

See you in another Tester’s Corner (maybe).

This entry was posted on Monday, March 7th, 2011 at 6:40 pm and is filed under Tester's Corner. You can follow any responses to this entry through the RSS 2.0 feed. Both comments and pings are currently closed.