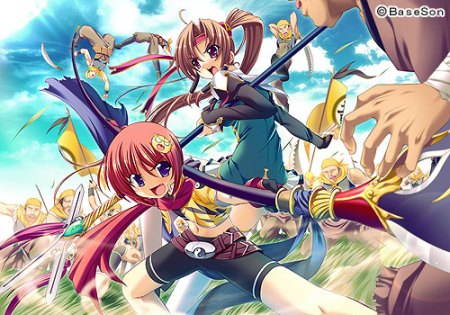 It’s time for another round of Tester’s Corner for Koihime Musou! This one’s from Pixymisa!

The main character of Koihime certainly has the last one in spades.

Koihime is, as the full name suggests, a romp through the Romance of the Three Kingdoms with all of the butch, manly men replaced with an assortment of well-endowed women and lolis while the beautiful women are replaced with futanari lolis and CHOUSEN *shudder*.

Things I noticed as I went along were that, barring the occasional Nexton text insertion error, the quality of the editing got better as I went along meaning that it mainly came down to personal preference in the end when beta-ing.  Alas, this didn’t shorten the time taken to complete the game by a significant amount as this game is LONG.  I’d have to estimate at least 60-80 hours playtime if you’re a completionist and want to explore the stories of the all of the cast members and to gain the elusive ‘harem ending’! It took far longer during beta due to having to check everything for accuracy though….

Every so often you’ll be thrust into a battle, which works on the standard Rock-Paper-Scissors principle of one formation being better than the other.  You get to choose who fights on the front lines and who stays back to organise the army and your choices will affect how effectual your army will be.  This offers a nice break from exercising the wrist muscles and actually requires some thought as enemy tactics become more varied in later battles.  It’s a shame that  enemy tactics are hard-coded so, if you’ve seen them once, you’ve seen them all.

To summarise, if you’re looking for a historically inaccurate romp through the Romance of the Three Kingdoms with an oversexed protagonist, this is the game for you.

From Kouryuu:
The game will launch at midnight*, so don’t forget to pick up your copy!
*February 28th, 00:00 AM EST

This entry was posted on Friday, February 25th, 2011 at 12:40 pm and is filed under Tester's Corner. You can follow any responses to this entry through the RSS 2.0 feed. Both comments and pings are currently closed.